Basement Wall cracks can become a source of seepage leading to mold growth and cause damage to your basement. Cracks can form from shrinkage, thermal stresses, movement, hydrostatic pressure and shifting or settling.

Despite the cause, it’s imperative to deal with the circumstances and cease the crack from spreading in order to avoid more damage. The repair is typically done through the injection process of a hygo-phobic polyurethane for moisture/seepage or an epoxy injection for structural purposes.

Non-structural cracks in basement foundation walls the most efficient and effective technique of repair is a hygro-phobic polyurethane foam. The Polyurethane expands 30 times its volume completely sealing off the crack. Also, it remains flexible as in case there is movement again, the polyurethane will expand and contract. .

Horizontal cracks that are larger than a one-fourth of an inch, epoxy injection is typically suggested. Generally, they form on walls that experience significant hydrostatic pressure or pressure from other sources such as trees, or inappropriate backfill causing constant expansion and contraction.

Also, horizontal cracks that are larger than a one-fourth of an inch signify a probable structural issue. Furthermore, they require the additional stability and strength of epoxy. Epoxies efficiently seal the crevice and simultaneously strengthen the repaired part. The epoxy basically combines and bonds the void. Furthermore, carbon fibre staples are utilized for reinforcement and stability. However when there are potential structural issues we always recommend you to get and opinion from a structural engineer.

When addressing a concrete crack our services are always professional and clean. Our trained professional technician first sets up for the crack with protective measures for the area. The crack is then cleaned and a series of holes are drilled into the crack on a 45% angle. Depending on the crack the drills are either crossed from side to side or sometimes drilled directly into the crack typically every 6 – 8 inched. Metal ports are then fastened into each hole to allow adequate pressure for the injection (WE DO NOT USE PLASTIC PORTS) plastic ports do not allow enough pressure to fill the crack adequately and can blow out of the hole. 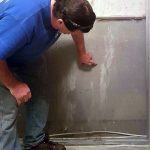 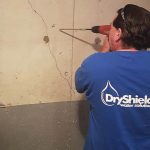 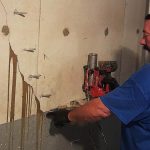 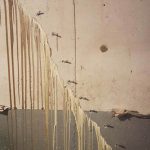 The metal ports are then injected from bottom to top making sure the crack is completely filled with the hygro-phobic polyurethane. Once the crack is completely injected with pressure the foam expands 30 times its volume. The area is them cleaned however the foam will continue to expand so a cloth is left at the bottom of the crack to catch any excess product. The ports are typically left in the wall, but in some situations where the ports may be left exposed they can be removed. All of our injections come with a full lifetime transferable warranty. If there is any seepage at all we come right back out for free and re inject. However we make sure it is done right the first time.

In some situations  carbon-fibre stripping is necessary to prevent any further movement of the crack. installing carbon fibre straps involve making horizontal cuts across the cracks. the carbon  fibre strips are then installed  and filled with epoxy.